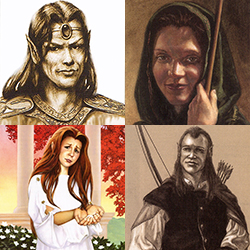 Elves were a race Faerie people who had existed long enough to see the birth of Man.

The Elves changed the location of Arborlon and their homeland a number of times.

In the Old World they had hidden themselves away from the Humans and lived in the Cintra. During the Great Wars, an Elf called Kirisin Belloruus was given the task of transporting the Elves and Arborlon to a new location by using the Loden and the Ruhk Staff. This location would eventually be known as The Valley and Arborlon and the Elves would remain there for five hundred years.

Arborlon was later transported to the Westland.

One hundred years before the Heritage of Shannara series, the Elves held a council and decided to leave the Westland. The Federation was encroaching on their territory more and more, and blaming the magic and saying it was the fault of the Elves. As the Eastland, Southland and Northland were already taken, they had the Sky Elves scout out alternate locations for them. They eventually decided on Morrowindl.

With the failing of Morrowindl and the arrival of Wren Ohmsford the decision was made to move Arborlon and the Elves back to the Westland. There they would remain, as the Ruhk Staff could no longer be used.

Before the birth of the New World, there had been a great war between good and evil which the Elves finally won by creating the Ellcrys and a Forbidding that banished the Demons into a timeless dark.

Were originally a reclusive race, their decision to isolate themselves from Man came at a cost. Man procreated at a much faster rate, and the Elves found their numbers decreasing in comparison.

Escaping into The Valley after the Great Wars they chose to have a greater involvement with their new home. They chose to dedicate themselves to restoration and nurturing their world and its creatures. This included the rest of the world outside of the Valley and so they began to talk openly of what would happen when they could return to the larger world.

A band of Elves would eventually break away and form the Wing Riders, or Sky Elves, moving to Wing Hove.

The Elves remaining in Arborlon and surrounding areas became known as the Land Elves. Their capital city was Arborlon and they remained faithful to the King of the Elves after Wing Riders broke away.

The Voyage of the Jerle Shannara series

In the early years of Wren Elessedil‘s reign, a contract had been drawn up for the Wing Riders to serve the Land Elves as scouts and messengers along the coast of the Blue Divide. They were provided with goods and coin in exchange.

Had a well trained army but it was dwarfed by the Federation army. Their only real alliance was with the Dwarves. They disdained the help of the Druids.

The Elven histories were stored deep in the underground levels of the palace in Arborlon. Boxes of other writings by prominent families had been donated over the years. They were intended to supplement, embellish or correct the official records.1Wards of Faerie – p 1

By the time of the Great Wars, Elven magic had been lost for centuries. They only retained things like the ability to hide and not be found, healing skills and the mean to care for the land and the things that live and grow on her. All types of Elfstones had also been lost, and had passed into legend.

The only magic of real consequence the Elves had was the Blue Elfstones. They studied the use of magic and a few possessed talismans handed down over the centuries.