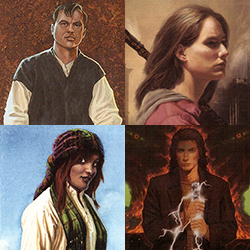 Humans were the major race in the Shannara universe.

Along with Elves, Humans were one of the few races that could be found in both the Old World and the New World. In the New World they were often referred to as Southlanders, as the Southland was where the majority of Humans settled after the Great Wars.

After the Great Wars Humans were no longer the dominant race. They fled south to survive. It was nearly a thousand years before Man raised himself above the level of the animals he hunted. A primitive but progressive civilisation was established. There was some order, and a semblance of government. Around this time they began to discover there were other races, creatures that had survived the Great Wars and developed their own races.

There were many battles between Man and one of those races, Gnomes. They fought over land rights and the battles hurt both sides.

After the end of the First War of the Races the Druids partitioned the Four Lands and allocated them the Southland. The Southland stretched as far north as the Dragon’s Teeth, however Man preferred to leave a buffer between themselves and the other races and abandoned almost everything above the Rainbow Lake. Only a couple of families remained behind in Callahorn, including the family of Kinson Ravenlock.

Men lived in isolated communities and let the rest of the world get along by itself.1The Sword of Shannara – p 2

Distrusted magic, believing there was more reliability in the sciences. This was especially so for those governed by the Federation.

They sought dominion over the other races and intended science to give them the power to do so. Despite being defeated in the Federation Wars they still harboured the desire. Outnumbered the other races two to one and worked hard to increase those odds through alliances and treaties. All they needed was a way to negate the magic of the Elves and Druids.