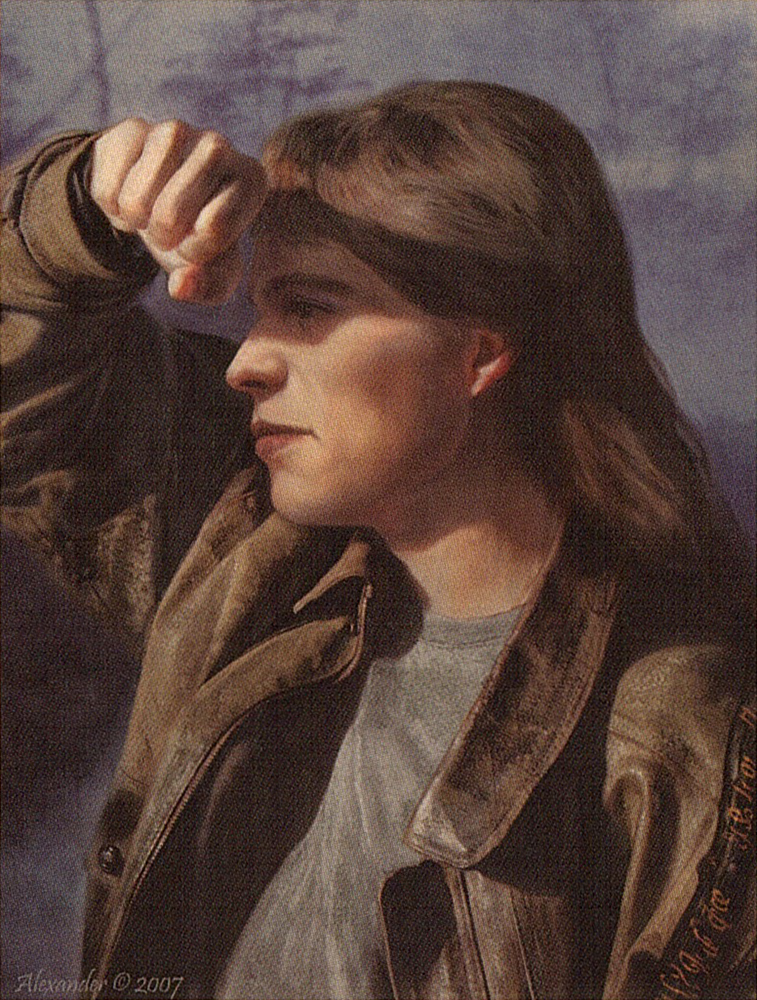 Logan Tom was a Knight of the Word.

Tall and lean, like his father. Scars criss-crossed his hands and arms. His face was all edges and planes but his gentle blue eyes helped soften the hardness. Long, dark hair.

Logan drove and lived in a Lightning S-150 AV – it was his favourite weapon against the things that hunted him.

When he was about eight, twenty years before the events of Armageddon’s Children, the compound where Logan was living with his family was attacked by Findo Gask and his army of Once-Men. After his entire family was killed in front of him a group of Once-Men converged on him. He shot them all, and in his anger at what had happened to his family, was quickly consumed by blood-lust, catching the attention of the first demon he had ever seen, Findo Gask. Another human, seeing what was happening, snatched the weapon away from him and herded him along with the other survivors.1Armageddon’s Children – pp 1-6

Became a Knight of the Word when he was travelling alone after Michael Poole‘s death. He was eighteen years old and realised he needed a purpose in his life. Logan had stopped somewhere for the night and was standing at the edge of a lake when he suddenly noticed a fisherman standing nearby. He spoke to the fisherman but was distracted by a noise behind him and when he turned back the fisherman had gone. A light then appeared on the lake moving closer and closer to him until it was revealed to be the Lady of the Word. She convinced him to become a Knight, and showed him visions of what he could be and the road he must take.

Several weeks later O’olish Amaneh gave Logan his staff and he began his service to the Word.

Originally tasked by the Word to hunt down and kill the Once-Men and the Demons that created them; he was later asked by The Lady to travel to Hopewell for a different mission.

Travelled to Hopewell to locate the grave of Nest Freemark.

The Elves of Cintra

Logan arrived at Safeco Field just after Hawk and Tessa had been thrown over the wall. As he made his way to find out what had happened, he stopped a girl called Meike who told him what happened. While they spoke she pointed out the approach of the demon army, causing him to warn her to leave the compound and go into the country with anyone who would go with her.2The Elves of Cintra – pp 1-6

Forced to fight against Krilka Koos.

Was healed by Hawk‘s magic.

He and the Ghosts began travelling southwards to meet up with the others. One night he was visited again by the Lady of the Word.