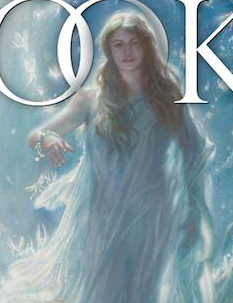 Mentioned In:
A Knight of the Word
Bearers of the Black Staff

The Lady of the Word was the voice of the Word.1Running with the Demon – p 211

Appeared young and beautiful. Skin pure and clear. You could see through her. Wore a diaphanous gown that hung in soft folds about her slender body, white like her skin. Contrasting long black hair that tumbled about her shoulders. Her face radiated peace and comfort.

Always stood upon the lake she appeared in, rather than in it, and never left the lake.

A Knight of the Word

Sent Ariel to Nest Freemark to try to make John Ross see the danger he was in. She also sent O’olish Amaneh as well, to kill John if he did not listen and was turned towards the Void, as the Lady suspected would happen.

Appeared to Logan Tom when he was travelling north to the Canadian border.2Armageddon’s Children – pp 47-50

Appeared to Logan Tom telling him to leave the Ghosts in search of the Elves, as Angel Perez was too injured to assist them. She instructed him to protect and guide an Elven boy to put a talisman to use and go the safe hold the boy would lead them to. She sent Trim to help.

Had not visited Sider Ament, like she had the other Knights.3Bearers of the Black Staff – p 2