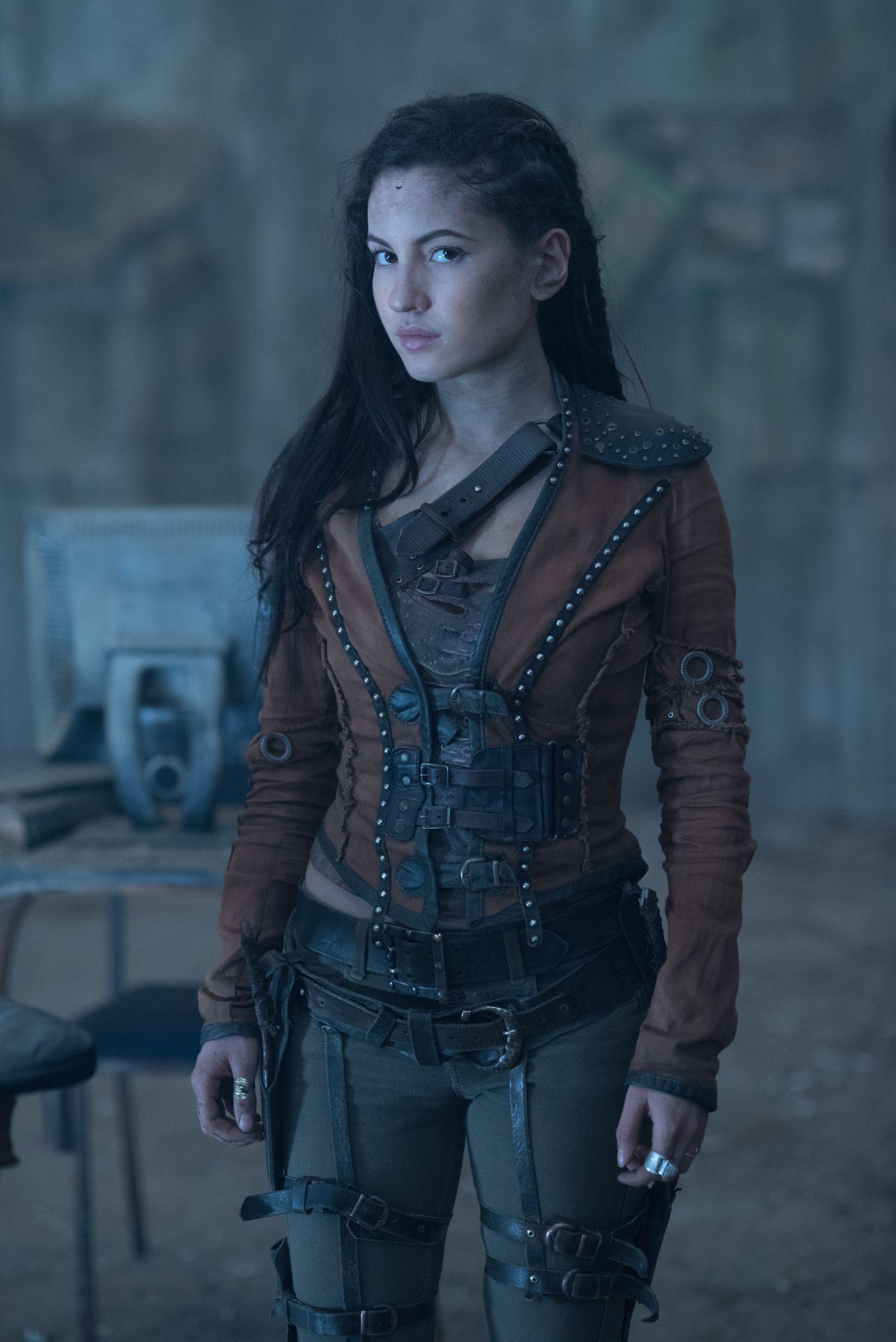 Eretria was the adopted daughter of Cephelo.

After the events of The Elfstones of Shannara she and Wil returned to Shady Vale and were married.

She and Wil would make an autumn and spring pilgrimage to the outlying communities south of Shady Vale. There were no healers within 500 miles of Shady Vale so they would lend their services where needed.2The Wishsong of Shannara – p 3

Eretria was the property of Cephelo who had bought her when she was a little girl. She spent her days learning how to steal and her nights fending off Cephelo’s men.3Episode 3 – Changeling

Rescued Wil Ohmsford from a Troll. She took him to a house she claimed belonged to her, but in fact belonged to a elderly couple. Preparing to steal whatever Wil had of value, she told him he had to take off all his clothes before he entered the house, claiming he needed a bath. Once he was in the bath she gave him some drugged wine that left him awake just long enough to tell her about the Elfstones. Once he fell unconscious, she took the Elfstones and abandoned Wil and the house.

Having camped out for the night, Eretria heard someone approaching. She rose suddenly and threw the knife, deliberately missing the intruder, Amberle Elessedil, and she warned that the next one would go through her heart. She asked Amberle who she was and when questioned back, claimed her husband found work near Balinor and she had to meet him there. She poured a drink for Amberle and drugged it but Amberle was suspicious and threw the drink in Eretria’s face, claiming her story was a lie. Eretria stated she did not believe Amberle either. They argued, Amberle stole Eretria’s food and her horse, throwing some jewellery at her as trade.

The next day, Eretria was attacked by another Rover. They fought and Eretria got the upper hand, until Cephelo appeared and ordered her to stop. Cephelo stated he was beginning to think Eretria had double-crossed him as they had scouted the house four nights previously. Eretria, aware that Cephelo would have placed a bounty on her head, refutes him. When asked where her haul was, she stated she had done exactly what he had taught her but was ambushed, her haul and horse stolen. She told Cephelo it was an Elf who stole them, causing both Cephelo and Nok to laugh. Cephelo threatened to sell her to Boca Madrid before turning away. Eretria ran after him, saying that she did not come back empty-handed but he had to promise not to sell her before she gave him the Elfstones.

At the Rover camp, Eretria explained the Elfstones previously belonged to Wil Ohmsford’s father but Wil did not believe they were magic. Cephelo thought Wil may have been lying and tasked Eretria with finding Wil again. If she did, he promised not to marry her off. Eretria was not satisfied with that and arranged that Cephelo would free her instead.

Eretria and Nok found Wil and Amberle at the Silver River. Eretria caught Amberle while Wil was underwater. Wil pleaded with Eretria to give back the Elfstones and let Amberle go but she refused. Eretria told Nok it was time to go causing Wil to plead to be allowed to save their dying friend, to which she replied their friend was out of luck. Wil tried to tell her about the Demons but she didn’t believe him. She shoved Amberle towards Nok, telling him to collar them.

As they were led away, Wil tried again to get Eretria to give him back the Elfstones but she instructed Nok to drag him behind his horse. When Amberle and Eretria caught up, Amberle challenged Eretria to a fight. In response Eretria dismounted and knocked her unconscious without giving her a chance to defend herself. Eretria instructed Nok to put Amberle on the back of her horse and they returned to the Rover camp.

Eretria introduced Wil to Cephelo who instructed her to untie Wil. She followed them as they walked off talking, stating he said Demons were after him.

Later that night, Eretria entered Cephelo’s tent. When asked if the Elf Girl was ready, she replied she killed to survive, not for sport. Cephelo explained his plan, ending by saying that Eretria herself would be killed if she did not obey him.

She went to the tent where Amberle was being held, cut the ropes around her wrists and gave her her options, stating if she killed Amberle she wanted it to be when she chose, not Cephelo. Amberle overpowered Eretria and took her knife. She forced Eretria out into the camp and tried to bargain for Wil’s freedom by threatening Eretria’s life. Eretria overpowered Amberle and was about to kill Amberle when Wil told her to stop.

Eretria let go of Amberle when they heard the roar of a Fury. When the Fury heads towards her, Amberle pushed her to the ground, saving her life. Wil ran to stand in front of them and they watched as he activated the Elfstones and killed the Demon. They dragged him into a tent where Eretria asked if he was still breathing. Amberle found a knife and threatened Eretria again but was interrupted by Cephelo. Eretria was left behind when Allanon rescued Wil and Amberle.

She packed her belongings, preparing to leave when Cephelo entered. She claimed that by delivering Wil, she had completed her part of the deal. Cephelo disagreed as he had neither the Elfstones nor the boy. Seeing the bracelet Eretria had just put on, he realised that Amberle was not just any girl. Eretria realised that Cephelo was never going to let her go, to which he replied she would only be set free if he had the Elfstones. If she lied to him again, he would kill her.

Eretria and Cephelo, followed by a group of Rovers, approached the Elessedil palace. Cephelo instructed Eretria to enter the palace and retrieve the Elfstones, warning her not to double-cross him.

After entering the palace, she found a robe and disguised herself. She saw Wil and followed him to his room. When he threatened to call the guards, she told him Cephelo had sent her to steal the Elfstones and he would kill her if she didn’t. When Wil didn’t believe her own father would kill her, she explained her past and that he definitely would. Wil said he was sorry that she had to go through that but again refused to give her the Elfstones. Eretria took advantage of Wil’s kind-heartedness, and the fact that he said he and Amberle were not together, and seduced him. She stole the Elfstones from him as he slept afterwards.

As Eretria attempted to leave the palace, she walked past Allanon, Amberle and Diana Tilton. Amberle recognised her and called out to her. As Eretria attempted to run, she went past the Changeling disguised as a Black Watch guard. When the Changeling heard Amberle call for the Rover to be stopped, it changed into the form of Eretria to get close to Amberle. Amberle walked closer thinking it was Eretria. The Changeling prepared to stab Amberle when Catania ran around the corner, trying to escape Bandon. The Changeling nearly stabbed Catania but was stopped by Bandon. The Changeling escaped and changed back to its guard form as the real Eretria reappeared. Ander Elessedil walked past her and, recognising her Rover-style boots, tried to apprehend her. She punched him and nearly got away but the delay gave Tilton enough time to arrive and she knocked Eretria unconscious.

Eretria was brought before Eventine Elessedil where she refused to give her name. Eventine stated she would be charged with the murder of the royal gardener and the attempted assassination of Amberle. Eretria denied that she was a killer and Amberle asked why she was there. Wil entered the room and told them she came for the Elfstones. Eventine told her an Elven court would decide her fate and if found guilty, the punishment was death. He ordered her to be taken to the cells. As she was taken away, she told Amberle she did not do it. Allanon watched her as she was led out. Wil followed her and Tilton to get the Elfstones back and she managed to convince him that she had not come to kill Amberle.

Eretria was visited by Wil and Amberle in the cells where Wil told her there may be a way for her to win her freedom. He explained they needed her help to catch the real murderer, a Demon, and she realised they wanted to use her as bait. She eventually agreed, knowing her only other alternative was to face the Elven court. Disguised as Amberle, she walked through the palace, accompanied by Wil and Tilton, to a guarded room. While Wil and Eretria waited, they argued until Tilton came back in.

Wil, Eretria and Tilton went to the Sanctuary where the Changeling had been killed. Eretria, believing her part had been done, attempted to leave but Amberle ordered Tilton to take her back to her cell, claiming she didn’t make deals with Rovers. Allanon stopped them, telling Amberle she needed to reveal what she knew. Wil revealed he knew Eretria was in Amberle’s vision, as Bandon had told him he had seen Amberle and Eretria together in a vision. Amberle reluctantly revealed that Eretria had appeared in her vision, but that she thought it was a warning, a warning that was apparently confirmed when Eretria attacked her. Allanon revealed all three of them would need to travel to Safehold.

The three of them, accompanied by Crispin Edensong and some other guards, set out for Safehold with Eretria chained to two of the guards.

After being revived by Wil and being told what he did, she commented that he was a healer after all. She asked about Amberle and when she was told she didn’t make out, she stood up to reopen the Bloodfire.

Had been living in Safehold.

Eretria appeared in a number of visions.
Search