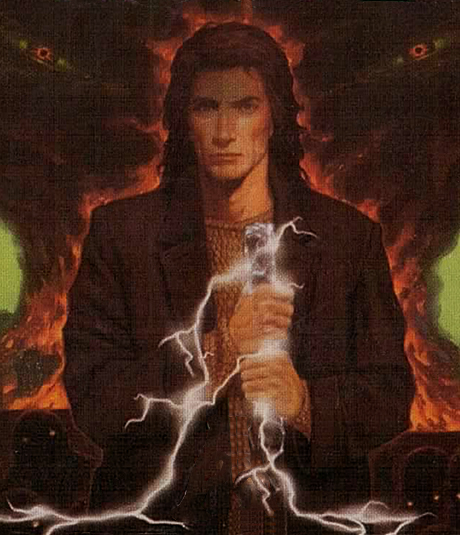 Appeared In:
Running with the Demon
A Knight of the Word
Angel Fire East

Mentioned In:
Armageddon’s Children
The Elves of Cintra

John Ross was a Knight of the Word in service to The Word.

Intelligent and intuitive.1Running with the Demon – p 200

John had excelled in school from an early age. He had an undergraduate degree in English Literature, and then migrated through a series of schools and graduate programs, stopping each time he came too close to completing his masters. He continued studying as he could not work out what path his life was to take.2Running with the Demon – pp 200-201

He eventually chose to travel and he went to England. After twelve months, he accepted an offer to stay in a cottage outside Betws-y-Coed. His exploration of the area eventually led him to Fairy Glen.3Running with the Demon – pp 201-204

There he met Owain Glyndwr who told him he should come back at night. When he finally did so, the Lady of the Word appeared to him for the first time. After seeing visions of the future, he committed himself the Lady and to becoming a Knight of the Word.4Running with the Demon – pp 205-216

Had been a Knight of the Word for ten years by the time of Running with the Demon. Carried a gnarled black walnut staff with symbols carved into it. It had been given to him by O’olish Amaneh as accepting the staff had given him a limp.

Had been tracking the Unnamed Demon for a while before tracking it to Hopewell.

Running with the Demon

Whilst sleeping on board a bus he had a dream of a possible future of Hopewell.5Running with the Demon – pp 1-4

Booked a room at the Lincoln Hotel for the duration of his stay.

Before he left he revealed to Nest the hidden purpose of why he came to Hopewell – if the demon had managed to convince Nest to join him, he was there to stop her.

A Knight of the Word

Had been working for Simon Lawrence at Fresh Start in Seattle for over a year. He spent a large part of this time writing Simon’s speeches.

Was now 43. He no longer considered himself a Knight, but could not bring himself to throw away his staff.

John had now been a Knight of the Word for nearly twenty-five years. Hitch-hiking through Pennsylvania, John dreamt of finding another Knight of the Word who had been crucified by Demons and Once-Men. Before the Knight died, he told John the details of a Gypsy Morph that he had captured. As with his other dreams, this was a premonition and John knew the Gypsy Morph would be born three days after Thanksgiving.6Angel Fire East – pp 1-7

As a Knight of the Word, John was haunted by nightmares that were actually visions of what would happen if he failed in his task to destroy the demons. These nightmares were so traumatic that he felt forced to change his sleeping patterns to limit what he had to endure. He was so traumatised by them that even the mention of the word sleep in a casual conversation would send chills through him.

Running with the Demon

John Ross’ first dream introduced a potential for the future of Hopewell, describing the state it was in and how there was barely anyone left. It also introduced the Compounds that would later appear in the bigger cities.7Running with the Demon – pp 1-4