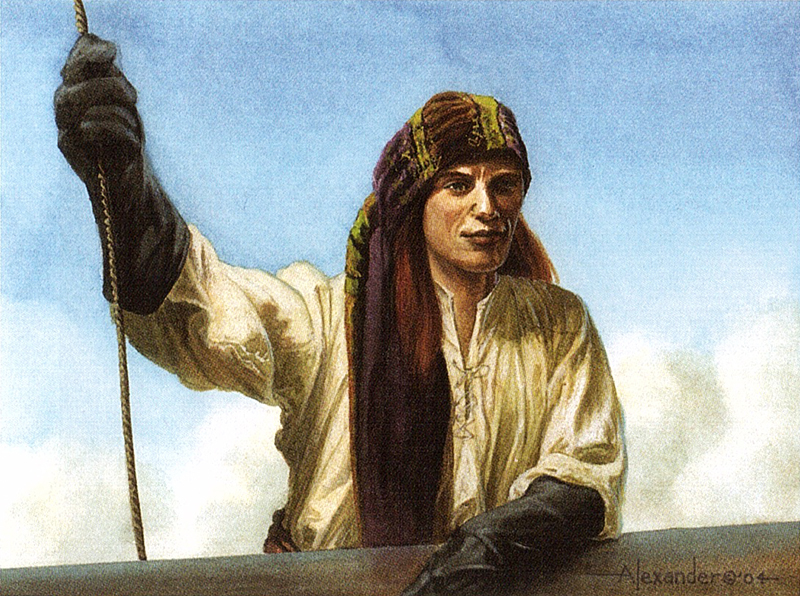 Redden Alt Mer was the half-brother of Rue Meridian.

A mane of flaming red hair down past his shoulders, tied back with a brightly coloured scarf. Green eyes. Gold earrings.

Carried himself fluidly, relaxed and self-assured. A big man who exuded strength and quickness. Rangy frame. Quick smile and explosive temper. It was considered good luck to fly with him – he was steeped in skill, courage, experience and luck. He had 78 confirmed kills in 192 missions, all in the same airship, all without serious mishap.

Was a cabin boy at 7, First Officer by 15, Captain by 20. As with most Rovers, he was a mercenary. Had sailed the entire Westland coast and explored most of the known islands off the Blue Divide. Spent three years flying for the Federation.

Seeing the Morgawr‘s fleet of ships appear out of the mist he ordered Spanner Frew to cast off the Jerle Shannara. With no insignia or flags on the ships he had no idea who they belonged to, but had to assume they were enemies.3Morgawr – p 23

Had returned to March Brume to live.4Jarka Ruus – p 86