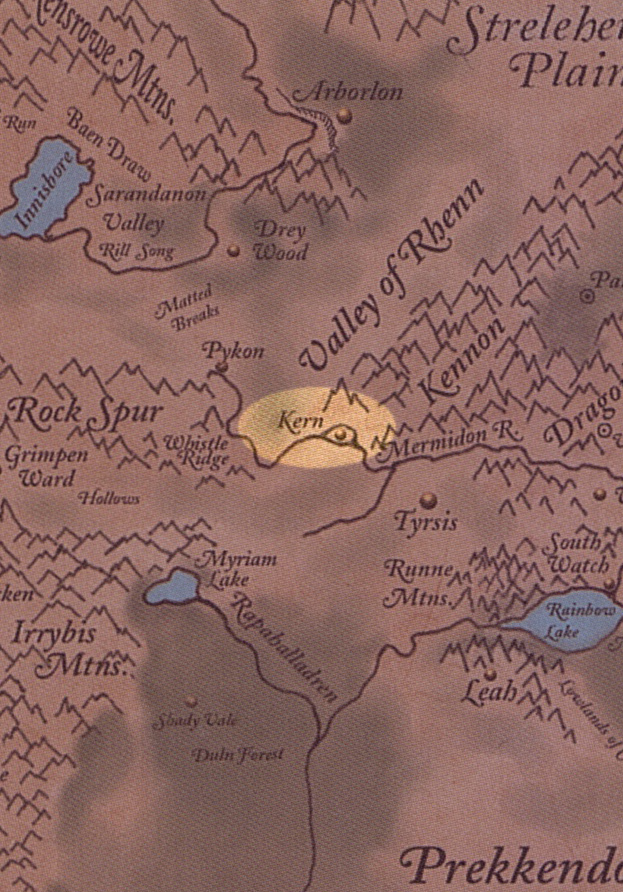 Appeared In:
The Sword of Shannara
The Sorcerer’s Daughter

Kern was the youngest and smallest of Callahorn‘s cities.1The World of Shannara – p 113

West of Tyrsis, on an island surrounded by the Mermidon.

After the rebuild, the city had no walls and the only access to the island was via ferry or private boat. Most buildings were made of stone (to make it harder for the city to be burnt down again) and were several stories high. Warehouses and craft halls lined the streets. The forests were gone and in their place a number of parks were cultivated with shrubs and native trees, enhanced with flowering bushes and colourful gardens.3The World of Shannara – p 114

Vaulted archways and elegant courtyards that were said to be more beautiful than the palace at Tyrsis.4The World of Shannara – p 114

The original Council Hall was old and proud, a cornerstone of the city.5The Sword of Shannara – p 467

The rebuilt Council Hall was a close replica of the original. Arched windows laced with metal latticework, covered walkways, carved wooden doors, graceful columns along the exterior. The original council table was a masterpiece of burnished wood, the new one was elegant with a more modern styling of flutework on the legs and edges.6The World of Shannara – p 114

After Kinson Ravenlock recovered from his injuries sustained in the Second War of the Races, he and Mareth made their home on an island in the Mermidon. They farmed then built a trading centre, opening a supply route along the Mermidon. Others from the Borderlands joined them and the settlement eventually became the city of Kern.7First King of Shannara – pp 482-483

The World of Shannara

The deep and swift waters of the Mermidon made the island easily defensible while providing access for traders from the Westland and to Tyrsis and Varfleet. The town became a symbol of rebirth, growing into a thriving community and then a city within a few decades.8The World of Shannara – p 113

Upon arriving at Kern, Menion Leah warned them the army was coming while Kern’s defences were mobilised, it was believed there was no immediate danger given the rains had swollen the Mermidon, supposedly making it impossible for a large force to cross.11The Sword of Shannara – p 462 Knowing this would not be the case, Menion addressed the council. Some of the councillors were angry by what they heard, others were angry. Some of the elders believed they should wait for the rest of the Border Legion to arrive while others believed that once the rains stopped they would be defenceless. Menion eventually came up with a plan where a small force would attack the Northland army. The attack would be done at night so that the actual size of the attack could not be seen, they would make a lot of noise so that they sounded bigger than they were. This would give the remaining people of Kern time to evacuate and escape to Tyrsis by all the boats and ferries available.12The Sword of Shannara – pp 465-473

The soldiers that attacked the enemy camp disrupted the enemy so thoroughly that they were still in a state of confusion four hours later and the forty thousand people of Kern were successfully evacuated. As Menion and Shirl Ravenlock sailed away they could see the sky filled with a reddish glow as the Northland army had burnt the city. The people had escaped but the city of Kern passed into ashes.13The Sword of Shannara – pp 478-480

The World of Shannara

It took fifty years for Kern to be rebuilt and many believed the new city lacked the beauty of the old. The palace was not rebuilt as there were no longer any kings, but the Council Hall and trade centres were improved. The city remained one of the primary trading centres for goods moving from the Westland to places east and south. Its docks were active year round with fishing and trade.14The World of Shannara – p 114

Hundreds of years later, Arcannen Rai hid in the ruins after escaping Paranor.